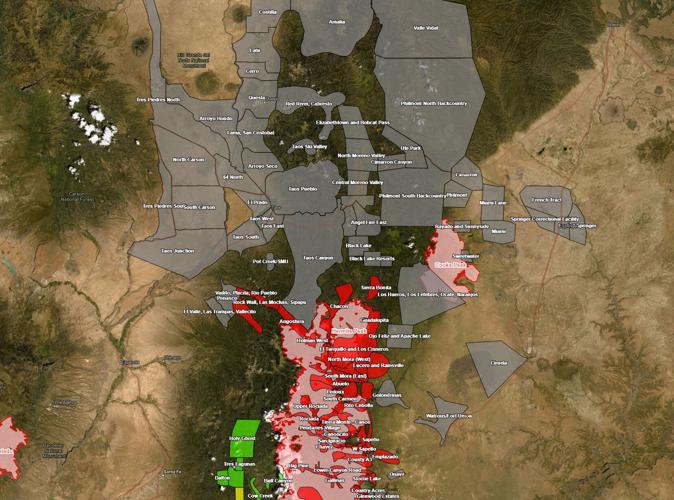 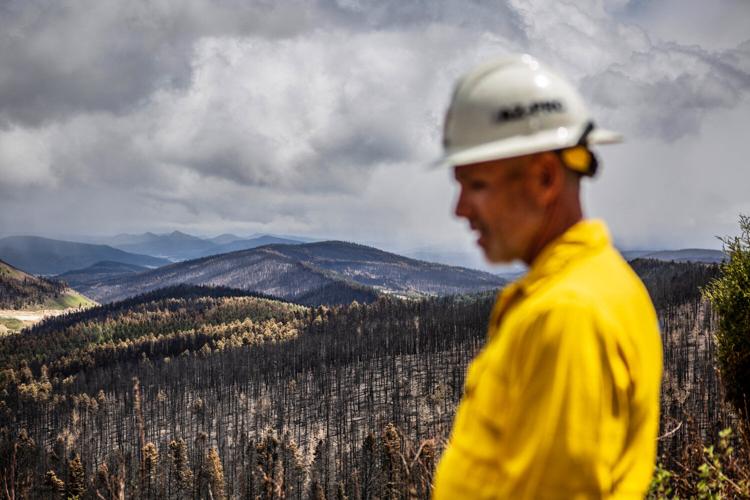 Operations section chief Ralph Lucas stands over a scorched section of the Mora valley where favorable conditions have allowed firefighters to make some progress on the Hermits Peak–Calf Canyon Fire. ‘I wanted our team to get around the top of this fire, and Mother Nature has given us an opportunity to do that,’ Lucas said. 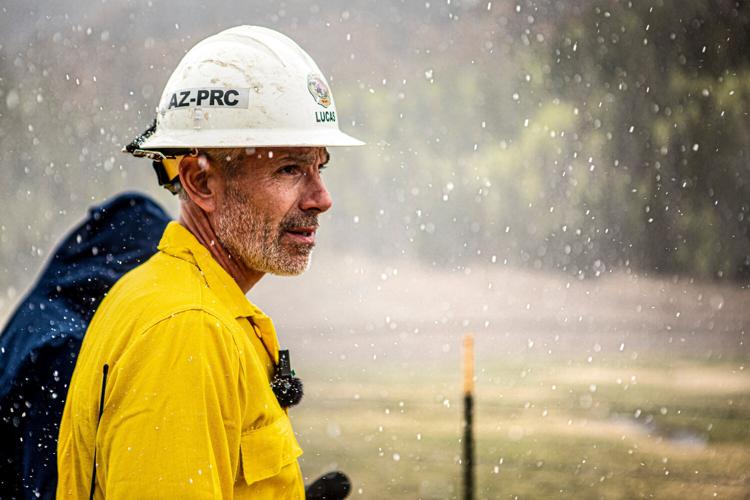 Snow falls as operations section chief Ralph Lucas looks over a valley near Angostura on Tuesday (May 24) where, days earlier, firefighters successfully prevented the fire from reaching homes on the valley floor using aggressive tactics. 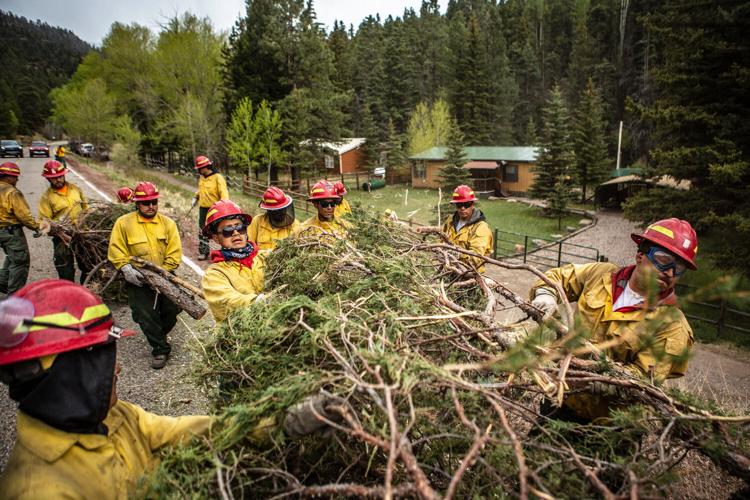 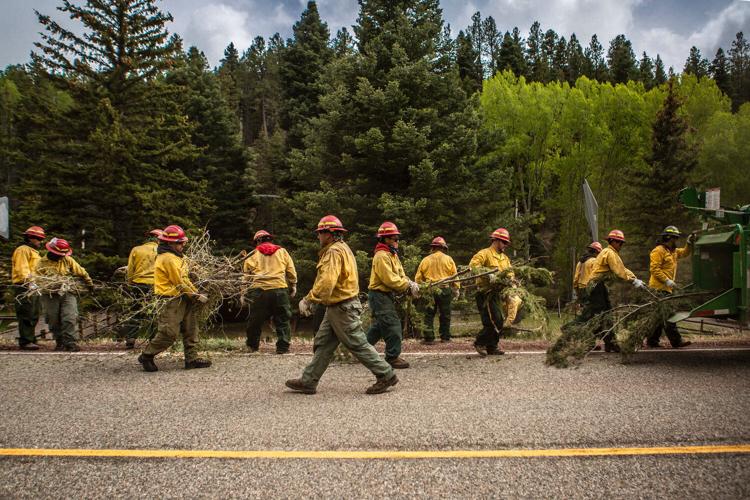 Operations section chief Ralph Lucas stands over a scorched section of the Mora valley where favorable conditions have allowed firefighters to make some progress on the Hermits Peak–Calf Canyon Fire. ‘I wanted our team to get around the top of this fire, and Mother Nature has given us an opportunity to do that,’ Lucas said.

Snow falls as operations section chief Ralph Lucas looks over a valley near Angostura on Tuesday (May 24) where, days earlier, firefighters successfully prevented the fire from reaching homes on the valley floor using aggressive tactics.

As a result of the slowed growth of the Calf Canyon-Hermits Peak Fire, fire officials have reduced the frequency of the live streamed community briefings for the incident. The briefings will now be held on Mondays, Wednesdays, and Fridays. "Daily operational updates will still be available on social media and will be posted at various locations around the fire," officials said, encouraging the public to continue to reach out to report smoke or ask questions. Community members may call (505) 356-2636 between 8:00 a.m. and 8:00 p.m. or email 2022.hermitspeak@firenet.gov to contact fire officials with questions or reports. Visit facebook.com/CalfCanyonHermitsPeak to watch the updates.

More cooperative weather last week allowed crews to gain some control of the massive Calf Canyon–Hermits Peak Fire, but strong winds over the Memorial Day weekend caused fire behavior to become more aggressive, particularly on the southwest, west and northwest edges of the fire, and also on portions of the interior of the fire area.

"Firefighters were able to hold the northern flank of the fire perimeter for a fourth consecutive day in critically dry and windy conditions [Monday]," officials said in a Tuesday (May 31) morning update. "Hotshot crews and engines working from Ripley Point east to Angostura were able to hold and continue securing the perimeter, despite winds gusting up to 45 mph. Firefighters also continued the work of securing the fireline from Ripley Point along the western flank of the Sangre de Cristo range down to Serpent Lake on the northwestern fire perimeter."

A small blaze that ignited on Saturday near a cell phone tower west of Angel Fire forced fire officials to rethink their strategy for constructing contingency fire breaks such as the 25-mile "Northern Line" being laid in the forest between Pot Creek and Taos Canyon. Smoke from the fire caused concern among residents of the Moreno Valley, all of which has been downgraded to either "Preparedness" or "Ready" evacuation status.

Operations Branch Director Kyle Cannon told the Taos News that the quarter-acre blaze likely began after a metal blade on a piece of heavy equipment struck a rock, throwing sparks which ignited dry pine needles or other light fuels on the forest floor. "It goes to show you how dry it is out there," he said. Fire engine crews responded quickly and contained the fire.

Operations Section Chief Jayson Coil said the incident caused fire officials to realize the risk is too great for dozer crews to continue creating those fire breaks during times of peak fire danger.

"That doesn't mean that the work is not going to be going on, it just means that we're going to change how we do things," at least for the next several days, Coil said. "The spark-producing work is [now] done early, early in the morning, and then later on things like rubber tire skidders and other piece of equipment that are less likely to cause sparks, they can still continue to work.

"But if you heard about a fire near Angel Fire, that's true it happened and it is contained," Coil said.

During their Saturday evening community briefing, fire officials noted that there are also many thousands of acres of unburned forest and grassland within the perimeter of the fire. Those unburned areas are prone to ignition during high wind events, generating smoke that may be cause for concern among residents in and around the fire area.

"Just be aware you will probably still see interior smoke as those pockets burn, but we're not expecting anything to come out the [containment] lines," said Stewart Turner, fire behavior analyst for the Southwest Area Incident Management Team, adding that structure protection efforts and fire lines within the perimeter are proving successful.

Coil added that crews are on patrol, "especially near the populated areas, making sure that none of that smoke that was starting to pop up presented a threat to the line or a threat to anybody's house."

Red flag wind conditions, low humidity and warm temperatures were forecast for the rest of Memorial Day weekend, with winds expected to shift more out of the southeast on Tuesday, conditions that will further test fire containment and contingency lines, according Turner.

As of Tuesday, the fire had grown to more than 315,00 acres with 54 percent containment, a significant improvement after weeks of unbridled growth and containment in the 20th percentile.

After evacuations were ordered for communities east of Peñasco two weeks ago in order to allow ground crews to establish fire breaks in what Coil characterized as the "nastiest piece of line" within the perimeter of the blaze, authorities last week dialed back the threat level and allowed residents in the Santa Barbara, Sipapu and Rock Wall zones to begin returning to their homes.

District 5 Taos County Commissioner Candyce O'Donnell said that no structures have been damaged within the southeast portion of Taos County impacted by the fire, including in Angostura, which transitioned from "Set" status to "Ready" status this week. Last week, Taos County Sheriff Jerry Hogrefe announced that the NM 518 road closure between Sipapu and Holman Hill would be lifted "to allow travel between Mora and Taos counties," but on Saturday O'Donnell asked non-residents to avoid the area if possible.

"If you could please avoid the Angostura area," O'Donnell said, estimating the area has about 175 electrical service connections. "There's gonna be a lot of traffic from people coming to check on their homes, in addition to all the fire activity going on up there. So we'd like to see if the sightseers can just hold on for a while. I've gotten reports of someone who almost ran a fire personnel vehicle off the road because they were looking at the fire and looking at the helicopters."

The blaze is still burning in rugged terrain about a half mile south of the Sipapu Ski and Summer Resort and around Jicarita Peak, but officials said they're confident that containment lines will hold despite the return to drier, windier weather conditions.

"I think we have to count our blessings right now, but we'll see how the fire lines hold when we get back into the bad fire weather this weekend," Bradley said. "The snow and cooler temperatures have helped, and there is a lot of structure protection in the area. They didn't mess around."

Bradley noted that with staff displaced from their homes and the road closure, the resort won't open for the summer season until sometime in June at the earliest.

"We don't want to jump the gun, we're going to give it a little while," he said, adding that Stage 3 Fire Restrictions mean the forest in which Sipapu is located is off limits anyway.

The rain and snowfall seen over parts of the fire gave crews a chance to get their arms around the fire for the first time, but they won't have a long-lasting impact on the severe and exceptional drought conditions that are feeding dry fuels to the blaze.

"You can have thousands of firefighters, resources, but you're not going to stop it on red flag days," Operations Section Chief Ralph Lucas said Tuesday (May 24). "Those days, no matter how much horsepower you have, there's nothing you can do."

Looking over the burn area from atop Holman Hill, from which the Mora Valley now appears as a great mosaic of mostly-burned forest with patches of green, Lucas said, "There was no way we could stop it in the Mora area," because the wind-driven flames several weeks ago simply could not be contained.

"With more days of mild weather, then I could look you in the eye and say, 'We got 'er," Lucas said.

Along NM 518 near Tres Ritos last week, dozens of firefighters were gathering the innumerable tree limbs they've trimmed from the lower trunks of trees, the brush cut from around structures and firelines. More than a dozen firefighters threw load after load of the fire suppression and mitigation debris into a wood chipper that drove slowly down the road, spitting out mulch and wood chips. Every few miles, piles of freshly cut timber were visible beside the road.

It's evidence that the largest fire in New Mexico's history has turned a corner and potentially entered a new phase.

For about a month, low humidity and historic, extended high-wind events forced crews to employ defensive strategies, with no hope of "getting out in front" of the fire, Lucas said. But a week's worth of milder winds, cooler temperatures and increased humidity — Lucas spoke in the midst of a snow squall near Angostura on Tuesday — have allowed teams assigned to the blaze to deploy "offensive strategies" for the first time.

"We have to stop chasing the fire," he said. "If nature allows us, we will get out in front."