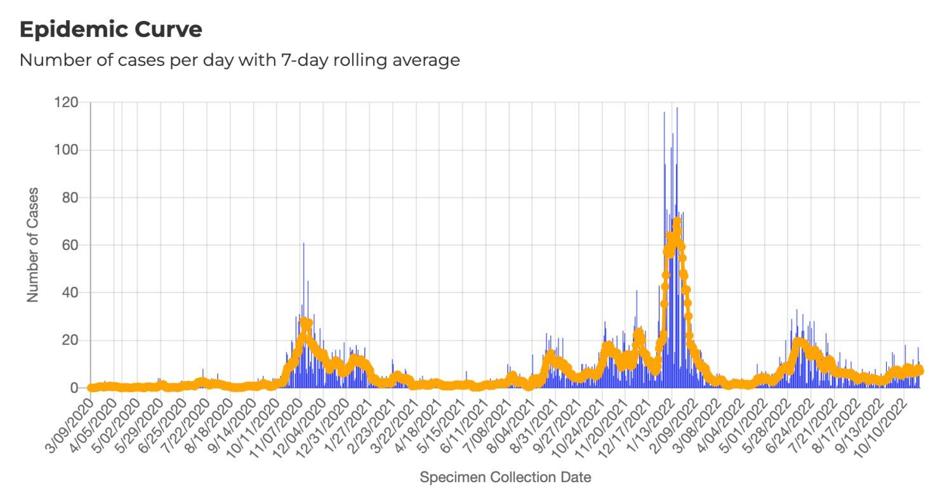 The COVID-19 case rate increased this past week, up by 63 percent throughout Taos County after a 24 percent decrease in cases the previous week, according to data from the New Mexico Department of Health.

The county saw 77 new cases in the past week, compared to 47 cases the week before. Meanwhile, cases are up by 53 percent throughout the state over the past two-week reporting period by the CDC, continuing an upward trend. Nationally, cases are up by two percent.

In New Mexico, the fourteen-day-average daily case count is at 439 cases, compared to 355 for the previous reporting period. The total number of cases in Taos County is now at 6,838, while 6,503 patients in Taos County are reported to have recovered from the virus.

Hospitalizations throughout the state have continued to increase, up by 19 percent over the past 14-day counting period, with a state average of 130 people hospitalized per day. The number was as low as 42 per week at the end of April, 2022.

One additional death was reported among Taos County residents in the past week, bringing the total number of deaths to 101 since March 1, 2020.

The CDC reports that over 1,066,000 people have died in the U.S. due to COVID-19, and is reporting there are approximately 19,826 hospitalizations nationwide as of press time, up from 19,239 the previous week.

To get vaccinated or sign up to get a booster shot, visit vaccinenm.org.