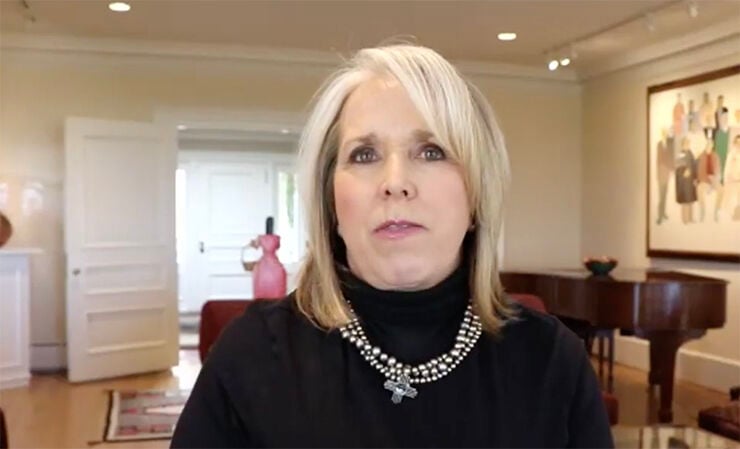 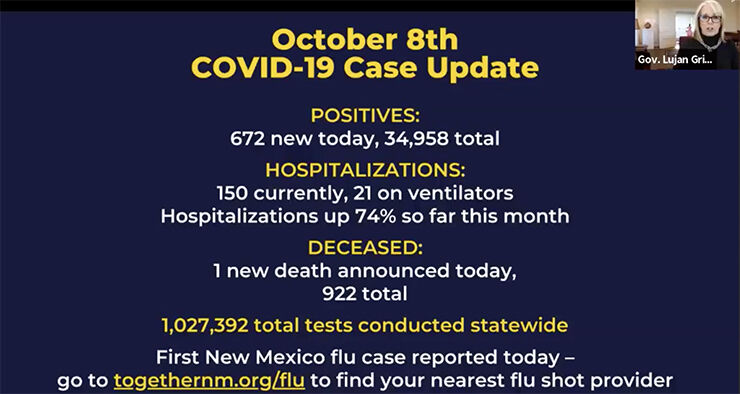 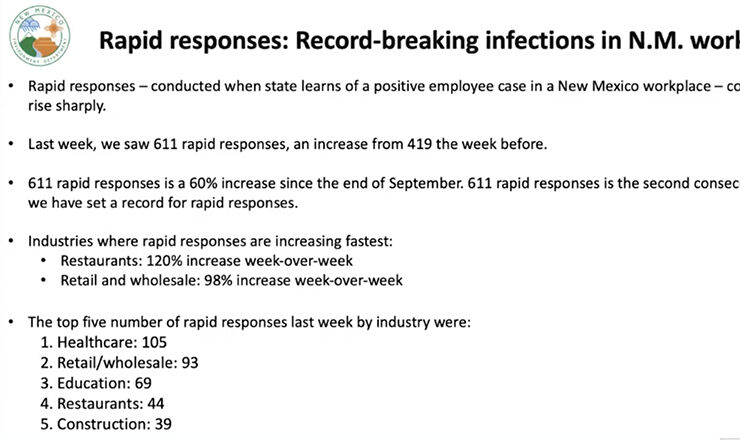 Gov. Michelle Lujan Grisham reintroduced several COVID-19 policies Thursday afternoon (Oct. 15)  as New Mexico’s positive test rate for the novel coronavirus continued to go up, and has now reached a new high. The state announced a total of 672 new cases Thursday - including two in Taos County -, the highest one day total in the state since the pandemic began. The number of deaths related to COVID-19 currently is 922 in the state.

Previous state guidelines - such as gatherings of no more than five people - have been reintroduced. Bars and restaurants must now close by 10 p.m., and enforcement of a 14-day quarantine for visitors from out of state, though she gave no details on how that would be handled. These add to the current state mandates, which include public mask wearing, social distancing, and remaining at home except for essential errands or work only.

Lujan Grisham, in a public livestream update, was quick to point out that she is “prepared to make another really tough decision,” but said “I don’t want to.” She also said that she admits that “none of this is fair. This is a crisis level horrific situation in this pandemic. It just means we have to work harder at crushing it. This is a marathon.”

Dr. David Scrase, cabinet secretary of the Human Services Department, pointed out bluntly that “our hospitals are now getting full,” saying that ICU beds were quickly being occupied. He urged the public to “keep that mask on anytime you are outside your home.” Scrase also noted that “nobody likes the situation we’re in,” but that we should rely on science and predictive modeling to get the state through the pandemic.

As the governor spoke during the livestream, comments flooded in criticizing and praising the state’s actions, and the reintroduction of more restrictions. In response, Lujan-Grisham urged New Mexicans again to take the virus extremely seriously, while also noting that the state’s efforts have had an effect on the economy and its people. “I understand we’re tired and we are exhausted by a pandemic,” she said. But noted at the same time that, “if you’re not frustrated by this, then you’re probably out too much.”

When asked why she didn’t go back to the original mandates that were imposed in March - such as shutting down all indoor dining and retail, Lujan-Grisham said that she believes in the science and modeling of her team. “Based on the modeling, I believe this state can manage COVID in a steady and slow fashion.” The new limitations will not eliminate indoor dining completely, but will strongly encourage residents to stay home.

Lujan Grisham said that while she understands the public frustrations, that unprecedented times call for unprecedented measures. “Stay home,” she said. “If an errand is not required, don’t do it. It’s that travel that’s moving the virus around.”

In terms of the 14-day quarantine for out of state visitors, the governor proposed individual fines, and “no criminal penalty.” She said she is hearing from people who have been “following the rules,” who have been upset when they see large gatherings around them. “This is another leveraging tool. It’s focused in the places where we’re seeing the most violations,” she added.

When questioned about the interstate quarantine plan, Lujan-Grisham said that the “state employees are willing because they are living through these burdens, and people want accountability,” but also said bluntly that the citations will rely on the help of police officers. “We will continue to put pressure on law enforcement to enforce mask and quarantine restrictions like they would a seatbelt law,” she said concerning the quarantine, mask, and social distancing requirements.

Many commenters critiqued the way schools are currently being run, and the lack of high school sports. Some mentioned that lots of young people in the state rely on sports scholarships to be able to afford to go to college.

Lujan-Grisham took the questions seriously, but said that because of what is going on in the country - regardless of whether people see it happening in front of them - serious measures need to be taken in order to make sure that the virus stops its spread. “We can’t keep closing restaurants [or schools] for weeks at a time,” she said, noting that the state and country need to buckle down and handle the tough situation in order to eventually combat COVID.

Lujan-Grisham also spent time talking about the importance of contact tracing, saying that “we need more robust ways to use these tools. None of this will be easy to execute, but doing nothing is as unacceptable here,” she added.

Elena Dumond, director of operations at the Sagebrush Inn & Suites, said she expected some tightening of restrictions, with state infection numbers on the rise. “We want everyone to stay safe and healthy but it's very difficult for businesses, especially in the hospitality industry,” she said.

“It’s a tough balance between peoples livelihood and peoples health,” said Dumond. “Both are very important.” Despite being in a precarious business position, Dumond said she takes the pandemic seriously, and said the Sagebrush Inn & Suites has been doing their duty to inform the public about the state restrictions. “We make sure our guests are well aware,” she said. “We have to tell them when they arrive that they are being asked to quarantine for two weeks.

Because nearly every restaurant in Taos already has closing times before 10 p.m., the county won’t see too much of a difference in the local dining scene.

Our Governor is doing the best she can to keep us safe in New Mexico.

Keep it Clean. Please avoid obscene, vulgar, lewd, racist or sexually-oriented language.
PLEASE TURN OFF YOUR CAPS LOCK.
Don't Threaten. Threats of harming another person will not be tolerated.
Be Truthful. Don't knowingly lie about anyone or anything.
Be Nice. No racism, sexism or any sort of -ism that is degrading to another person.
Be Proactive. Use the 'Report' link on each comment to let us know of abusive posts.
Share with Us. We'd love to hear eyewitness accounts, the history behind an article.