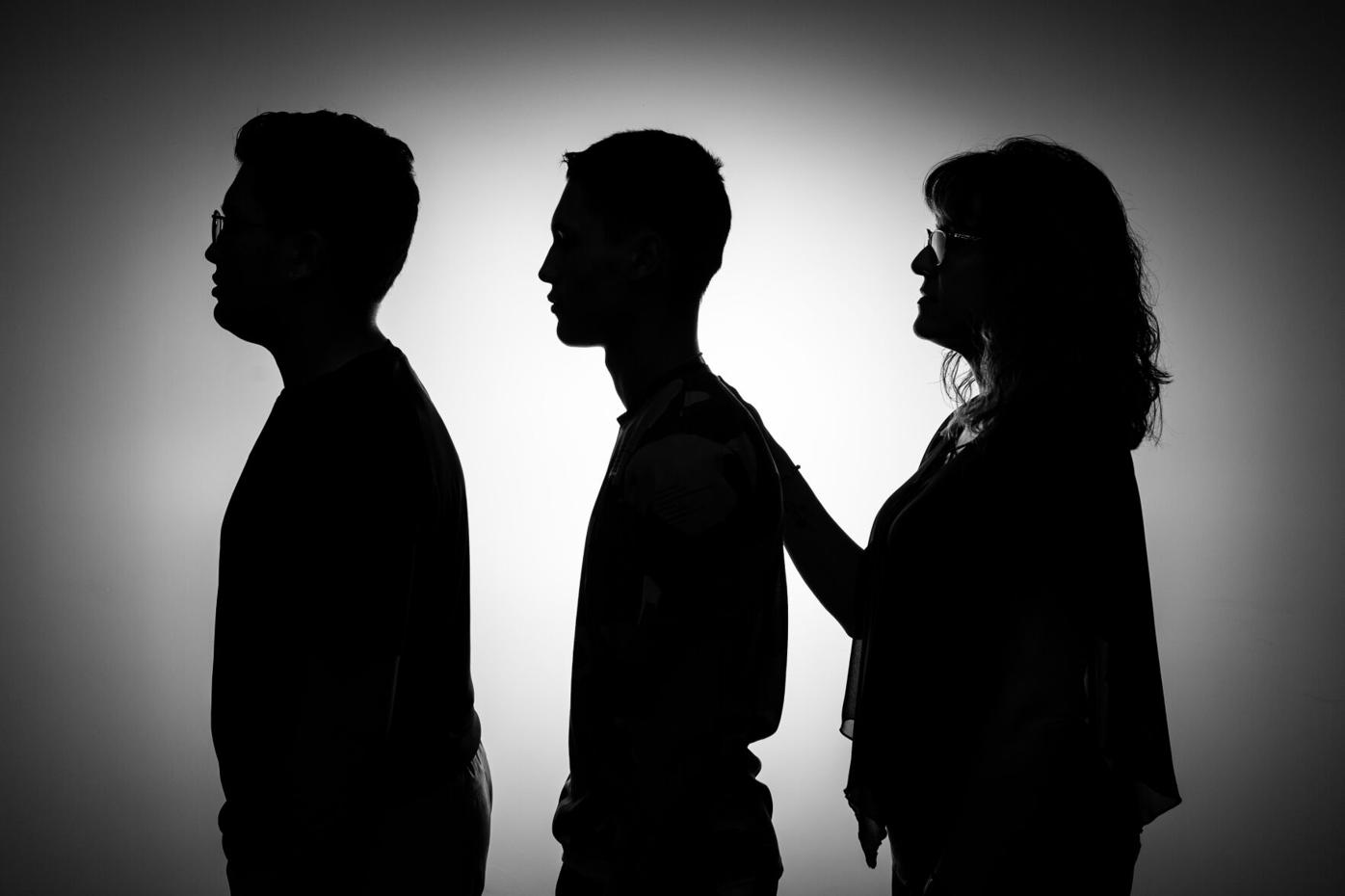 (Right to left) Hitana Espinoza stands for a portrait with her two sons, Mateo and José in their home on Tuesday (Aug. 10). 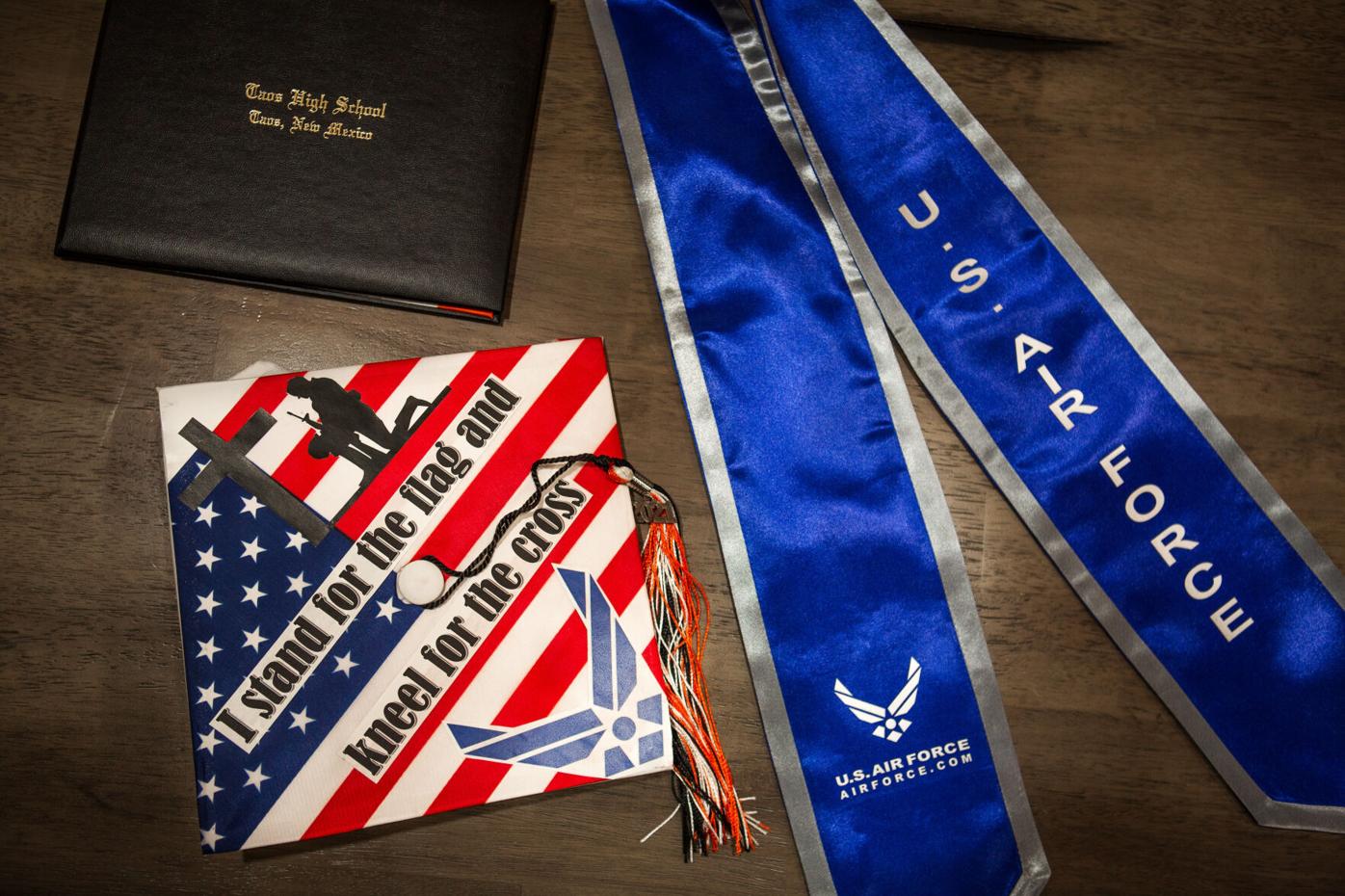 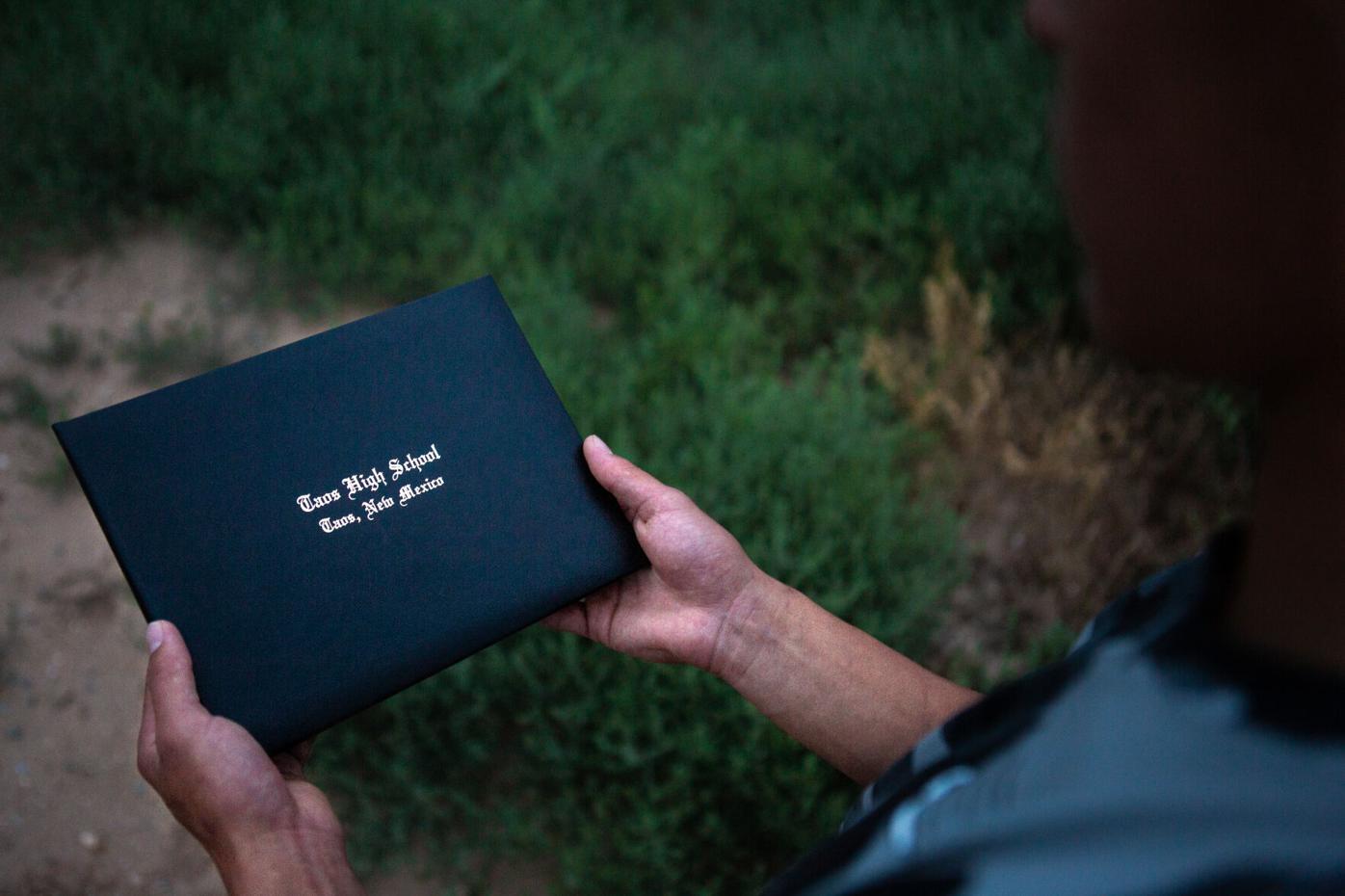 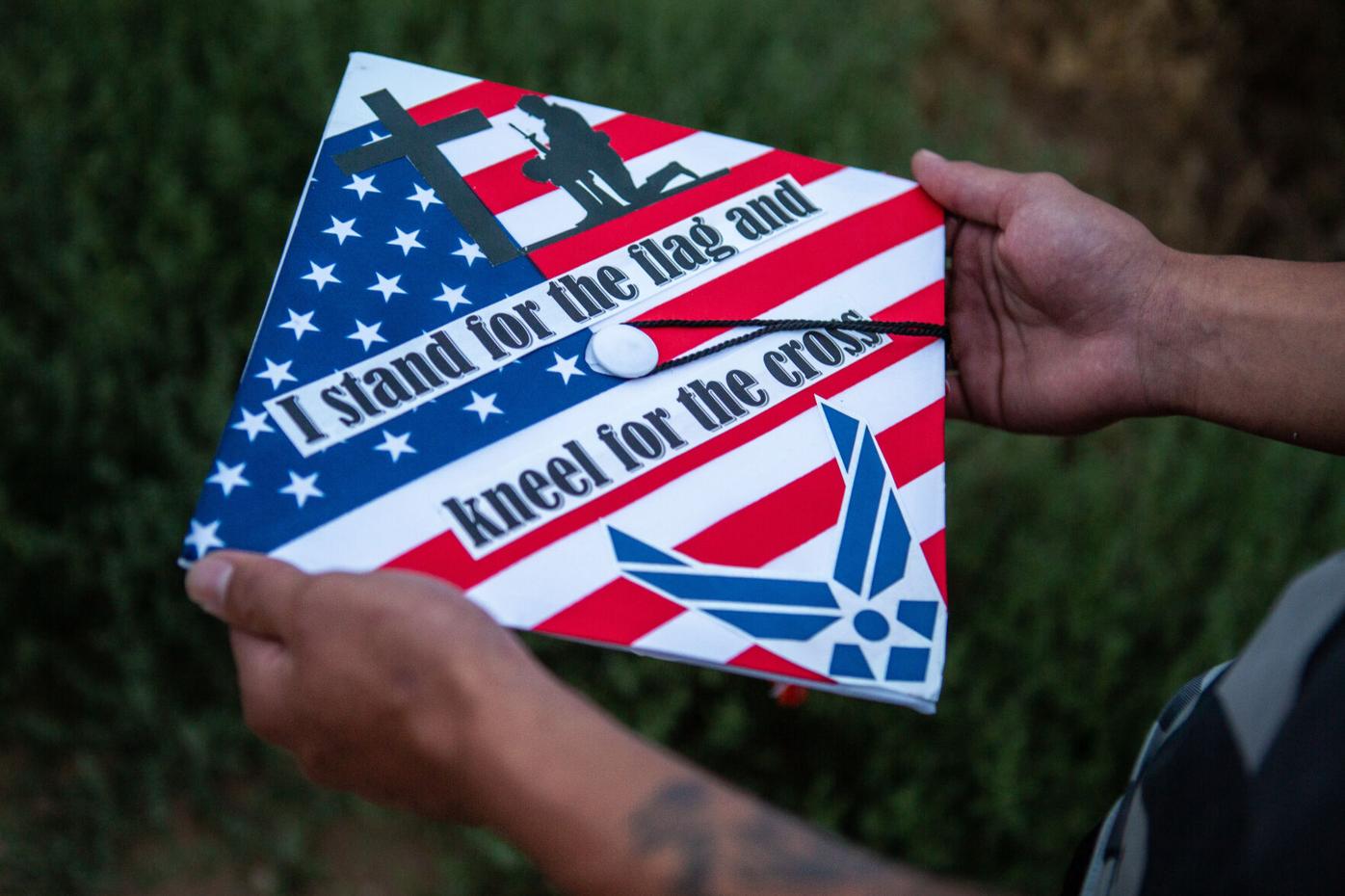 (Right to left) Hitana Espinoza stands for a portrait with her two sons, Mateo and José in their home on Tuesday (Aug. 10).

Healthcare workers were first in line to receive COVID-19 vaccines, but with new variants of the novel coronavirus spiking case rates across the country, even the inoculated are facing a heightened risk of infection.

Hitana Espinoza, a revenue integrity manager at Holy Cross Medical Center who tested positive this summer despite getting the Pfizer-BioNTech vaccine in the last week of January 2021, understands this firsthand.

Her husband José, who works as a facilities coordinator with several Taos Charter Schools, received the Moderna vaccine in February. But Espinoza's oldest son, Mateo, was reluctant to get vaccinated and also fell ill with the virus this summer.

"I didn't push it, because it wasn't required," said Espinoza, who worked as a nurse for more than eight years before working on the business side of the hospital.

Roughly 164 million people have been vaccinated in the U.S. as of this month. The Centers for Disease Control and Prevention now recommends everyone 12 years old and above to get vaccinated.

But in recent weeks, amid a rise in "breakthrough cases," the CDC has recommended that even vaccinated persons should wear a mask indoors to reduce the spread of the new and more infectious COVID-19 delta variant.

Mateo graduated from Taos High School in May, and plans to join the military. To celebrate his graduation, Espinoza and her husband threw him a party at the Sagebrush Inn. She said a majority of people did not wear masks at the event.

"Everything felt safe. We were socially distanced, to an extent," she said. The room had a capacity limit of 150 people, and they nearly filled it.

After the party, and with pressure from Espinoza, Mateo agreed to get vaccinated. He said he wanted the Johnson & Johnson vaccine so he could be fully vaccinated with only one shot. He hates needles.

The pharmacy told them they had to wait until he turned 18, because the FDA does not recommend the J&J vaccine for children. Mateo's birthday was July 10. They scheduled his vaccine for July 12.

On Saturday (July 3), while Espinoza and her family were camping over the Fourth of July weekend, they were notified that Mateo had potentially been exposed to COVID-19. "But we felt the exposure was minimal," she said.

Espinoza notified the others in her group, who had all been vaccinated, except for one person who had already contracted COVID-19. "We're fine. We're vaccinated. We're outside," said those in her group, according to Espinoza.

"Tuesday (July 6), Mateo started having a little bit of a cough, but he had had coughs the last few months, with allergies," she said.

Mateo told her he was 90 percent sure it was just allergies.

"His younger brother immediately masked up, and ate dinner at the island, versus at the table with the family." The next morning, Wednesday (July 7), Mateo woke up with a 102-degree fever and body aches. "And we knew: He has it," said Espinoza.

She brought her son to Holy Cross Hospital, where he tested positive for COVID-19. "He felt horrible - really bad body aches," said Espinoza.

She brought him home, along with her office computer so that she could keep working, and isolated Mateo in his room. Espinoza sanitized the house, while her son José packed his things to stay with his grandmother.

Mateo remained in his room, and Espinoza and her husband were careful to wear masks whenever they needed to enter.

"Thursday (July 8), I had this little kind of clear-my-throat thing. I thought, hmm, that's weird," said Espinoza. "Friday, it was a little bit worse."

Espinoza took a home test on Friday (July 9), and it was negative. "That night, I thought -- oh shoot -- I wonder if I'm gonna end up being a breakthrough case."

The CDC defines vaccine breakthrough cases as a small percentage of fully vaccinated people who still get COVID-19 if they are exposed to the virus that causes it.

While people who have been vaccinated are much less likely to get sick, it can still happen. It's also possible that some fully vaccinated people might have infections but not have symptoms (asymptomatic infections).

On Saturday, Espinoza said her cough had only gotten worse, and she began to feel body aches. "I checked my temperature 10 times, and it was anywhere from 99.9 to 100.7 [degrees].

Espinoza took another home test. This time it was positive. "This was Saturday (July 10), which was my son's birthday," she said.

Mateo spent his 18th birthday in isolation, only coming out of his room to eat dinner - outside and socially distanced.

His chills, body aches and fever lasted for two days. "He said he felt like his body was broken, felt like he couldn't walk right," said Espinoza. "And then he started to feel better, but the awful cough lingered."

"It was very emotional, because I didn't feel good. And we had a trip planned," she said.

Espinoza and her family had planned a trip to Cancún, Mexico to celebrate Mateo's graduation and birthday.

"Prior to me not feeling well, I was trying to see if we could still make it work - doing all the research, 10 days from onset of symptoms. The cough started Tuesday for my son, but really, the congestion started over the weekend," she said. "So trying to calculate, maybe we could make it happen that we could leave on time on Thursday (July 15)."

But Espinoza knew that they would need to have documentation of Mateo's recovery, "Which is a letter from a doctor stating that you're cleared to travel because you meet CDC guidelines for being able to end isolation, and you've been fever-free for 24 hours," she said.

"We talked to the state. They call you when you have a positive test. They felt he was cleared to travel Thursday, but they don't provide you anything in writing. You have to go to the doctor for that," said Espinoza. "And then I ended up coming down sick."

She knew there was no way that she would be cleared to travel by July 15. "The rates for Southwest Airlines were double what they were when we booked our flights. I just thought, there's no way I could move it."

Espinoza contemplated sending her husband and younger son José on the trip by themselves. "They got tested. They were negative. They had moved out of the house," she said.

"It's supposed to be my oldest son's trip. If I could get him cleared and send him - but he felt bad, because he felt he was the reason that I had it," said Espinoza. "He's like, 'that's not fair, Mom.'"

Espinoza called the airline, and was able to push the trip back for her and Mateo without having to pay additional fees. Her husband and younger son left for Cancún on the original date, and she and Mateo, along with his girlfriend, flew out a few days later to join them.

"It was a week of headaches to get doctor's telehealth appointments arranged, make sure we had the COVID-19 positive test results, plus our documentation of recovery from our doctor - and make the flight and resort date changes," she said.

Both Espinoza and Mateo, and her husband and José, flew out of Albuquerque. She said at some point in their journey, either in the airport or checking in to their resort, they were asked if they had been tested or exposed to COVID-19.

Thrown for a loop

"I isolated my son before I came down with it. If you're fully vaccinated, you don't have to isolate, even if you had a known exposure - at that point in time," said Espinoza. "The CDC recommendation has since changed. But in early July, you didn't need to isolate."

"I didn't go anywhere. I stayed home tending to him. I thought I'd be okay. And I wasn't," she said. "It just threw me for a loop."

Espinoza spoke with the infection preventionist at Holy Cross, who recommended sending a specimen to the state for variant testing. "But the state won't release those results to the hospital, or to me," Espinoza said. When I finally got my call from the state about my positive test, it was a week after I was already back from Mexico. They said there's a hotline that I could call, and ask to be a part of a study, and then I could potentially get my variant results."

Espinoza called the number, but got put on hold, and then got disconnected, so she never found out if it was the delta variant she had contracted.

"My symptoms were definitely milder than my son's. I believe that being vaccinated is the reason I didn't get as sick as he did," said Espinoza.

No vaccine is 100 percent effective, but the CDC says, "Fully vaccinated people are much less likely to be hospitalized or die than people with similar risk factors who are not vaccinated."

As of Aug. 2, the CDC reports that less than 1 percent of vaccine breakthrough infections (more than 7,500 patients) have led to hospitalization or death.

When she asked Mateo what lessons he learned, he said, "I could have still gotten [COVID-19], even if I had gotten the shot."

Despite his initial hesitations, he now agrees: He should have gotten vaccinated.